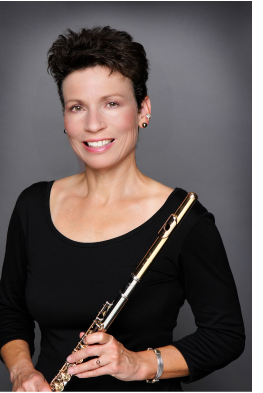 Joanne Lazzaro is a classically trained flutist who “accidentally released a New Age solo Native American flute album.” Under The Stars (2015) went on to win multiple awards both in the USA and globally, establishing her as an independent world flutes recording artist. In 2018 she started her own record label JoRazzal Music, releasing a World Premiere recording of Canyon Shadows by renowned classical flutist & composer Katherine Hoover, featuring her trio “Dreamcatcher”. Recognizing her first effort as a Producer,  “Searching – Desert Dawn Mix”  from that album was nominated for a 2018 Hollywood Music in Media Award for Best World Recording. Her most recent release is the world premiere recording  "A Dark Goddess - for flute and strings" by contemporary classical composer David Warin Solomons. This acclaimed single is JoRazzal music's first foray into high-definition audio (96 kHz/ 44 bit) and remote recording with the St. Petersburg (Russia) studio strings.

Joanne began taking classical flute lessons at the age of 10 as part of a school band program. “It was the only instrument I really wanted to play - I never considered anything else.”  Naturally, she soon picked up piccolo, alto flute & bass flute too. Her love of the flute extended to every exotic flute-like instrument she could find, and soon developed a collection of bamboo, ceramic and wooden flutes that friends and relatives found on their travels. Her first Native American flute found her in a gift shop in Boulder Colorado, where she had stopped on a cross-country camping trip. “As soon as I played a few notes on it, I was completely hooked.”  She learned to play it sitting by the campfire, under the stars. “I didn’t fully appreciate the potential of the Native American flute until the day I heard Carlos Nakai’s album Canyon Trilogy playing in a National Park Visitor Center. He played so beautifully – I bought the album (of course!) and I was inspired to get serious about playing it really well.”

Founder and host of the Los Angeles World Flute Circle, she continues to inspire flute love and awareness through her convention workshops for both the National Flute Association and the World Flute Society.

World flutes keep her in demand for studio sessions with other independent recording artists & film-makers. Her 2021 session for "Eden Ahbez's Dharmaland" required "an entire trunkload of flute" in order to replicate the flute sounds of the 1960's pop icon Eden Ahbez. She inspires new flutists as the founder and host of the Los Angeles World Flute Circle, is an active member of the Los Angeles chapter of NARAS (the GRAMMYs™) and a popular workshop clinician with both the National Flute Association & the World Flute Society. She holds a BS in Music from Lebanon Valley College and a Master of Music from the University of Southern California Thornton School of Music. Her solo music, and her releases with the Los Angeles Flute Orchestra, are all available at CDBaby, AppleMusic, Spotify, Amazon, iTunes, Pandora & most major distributors.

And for the curious -  Here's some new information courtesy of 23&Me!
For years, every time I played Native American flute, people often would ask me "Are you of Native American descent" to which I would answer "No, not as far as I know!" When I got my DNA analyzed in 2017, I (and the rest of my family) was surprised to learn that I am 2/10ths of 1 percent Native American (a single ancestor, tribe unknown), on my paternal grandmother's side, pre-dating the arrival of my Italian great-grandparents in America. There's an untold story there that I'd like to uncover someday.

And lastly, "Where was that banner photo taken?"
Mono Lake, California, by photographer Nik Arkimovich